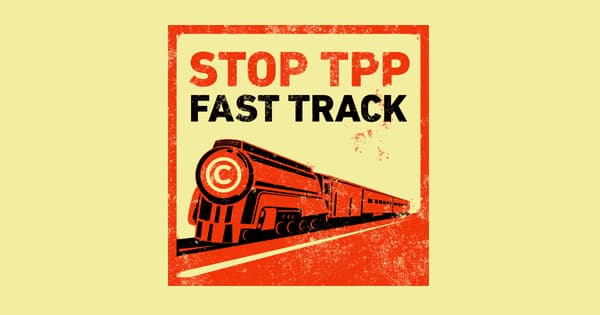 The Trans-Pacific Partnership (TPP) is a controversial, secret agreement that would undermine online freedoms worldwide by exporting dangerous copyright rules. The White House is trying to bypass debate on the contents of the deal by passing a bill known as Fast Track. Help us stop the bill in the House by speaking out now.

While Hollywood has had easy access to view and comment on draft texts—so it can get the provisions it wants—our own lawmakers have been mostly cut out.

But a new bill threatens to make this process even worse.

Lawmakers in Congress are trying to pass legislation to hand over their own constitutional authority to debate and modify trade deals. The process is called Fast Track, or Trade Promotion Authority. It creates special rules that gives the White House the power to negotiate and sign trade agreements without proper Congressional oversight. That means Internet and copyright provisions, buried in omnibus treaties, will get almost no oversight.

Tell your representative to stand up for your digital rights and preserve checks and balances in government.

President Obama is in the midst of negotiating two major trade agreements: the TPP and the Transatlantic Trade and Investment Partnership (TTIP), the EU-US trade agreement. Both TPP and TTIP are multinational trade deals that will carry copyright and digital privacy provisions that threaten millions of users’ rights. Trade agreements carry these harmful provisions because the White House has negotiated them with no credible public consultation. Instead, these agreements reflect corporate interests, which have little concern for how these policies will impact the Internet and our digital rights.